Upon hearing the news of flooding in the northeast region of India, JTS staff comprised of one local Korean and one Indian staff member visited Tripura State to provide emergency flood relief.

A large population of Chakma ethnic group live in Tripura, where the flooding occurred.  Ven. Priyapal Sunim, the Chairman of JTS India, who is a Chakma, sent a request to the Chakma people in Triputa to assist JTS relief activities when the JTS India staff arrived. One person from the Chakma group joined the JTS India staff in traveling to the flood site. They traveled for a total of 23 hours to go to Tripura from Dungeshwari by train and by bus.

By the time they had arrived, it was already one week after the flood. Although the situation was no longer urgent, people had lost their homes. They had to worry about their next meal, and children were studying in makeshift classrooms. It was a sad situation.

Manu in Tripura, the first area selected for relief aid

Since JTS India had already sent a request for cooperation, the JTS India team were able to have a meeting right away with the villagers led by the head of the village, and they began a field investigation of the flooded area.

After the field investigation, JTS staff discussed with the villagers about the scope of flood damage, the number of households affected, and the items that the flood victims needed. 228 households out of 850 were selected for relief aid.

Right away, JTS India staff compiled a list of households that were affected by the flood and created coupons that the recipient households would need to show to receive the relief aid goods. They worked with the leaders of various villages until late at night to make all the coupons. The JTS India staff gave the coupons to the village leaders who in turn distributed them to the relief victims the next day with instructions on how to exchange them for relief goods.

Since what the flood victims most needed was food, twenty-five kilograms of rice, one kilogram of legumes (Dal), and one liter of mustard oil were selected for distribution. The distribution of the relief goods took place in two different locations to avoid overcrowding.

Pecharthal, an area more severely damaged by the flood

Meeting with a Block Development Officer

Because Pecharthal is larger than other areas and was severely damaged by the flood, the discussion was more detailed and the meeting took longer. There were more flood victims than expected, so the JTS India staff had to decide as to how much relief they could distribute. To provide relief goods to all those who needed them with their limited budget, JTS India staff decided to just give twenty-five kilograms of rice and one liter of mustard oil to each household and not the legumes given in Manu.

With the help of the Block Development officer, JTS India staff were able to buy the rice and the mustard oil at a good price. Also, and rice store owners delivered the rice at no charge after hearing about the JTS relief activities.

A large crowd of people gathered early in the morning in front of the Block Development building to receive the relief goods. Some mistakenly thought that they would not be able to receive any relieve goods if they were too far back in the line, so there was a momentary confusion as many people tried to get to the front of the line. However, thanks to the Block Development officers, the distribution of relief goods proceeded smoothly.

As a result, 389 out of 416 households affected by the flood received relief goods after the identification verification process just like in the Manu area. The faces of those who received the relief goods brightened up, which made the JTS India team feel very proud. Those who had to travel a long distance to get home used either bicycles or rickshaws to carry the relief goods they had received.

Two JTS India Staffs who made the trip

Both Manu and Pecharthal area flood victims received 2,000 Indian Rupees from the Indian government, which won’t be much help to the people who have lost their jobs and no longer have places to live. However, the government has yet to make a plan to provide additional relief aid to the flood victims, which made the JTS India staff members’ hearts very heavy.

Wishing that the flood victims will be able to settle down soon, the JTS India staff made the long trip back home to Dungeshwari safely. 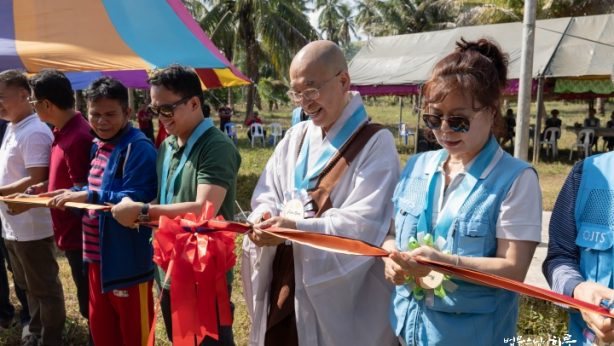 In September, Venerable Pomnyun Sunim traveled to India, Bangladesh and...