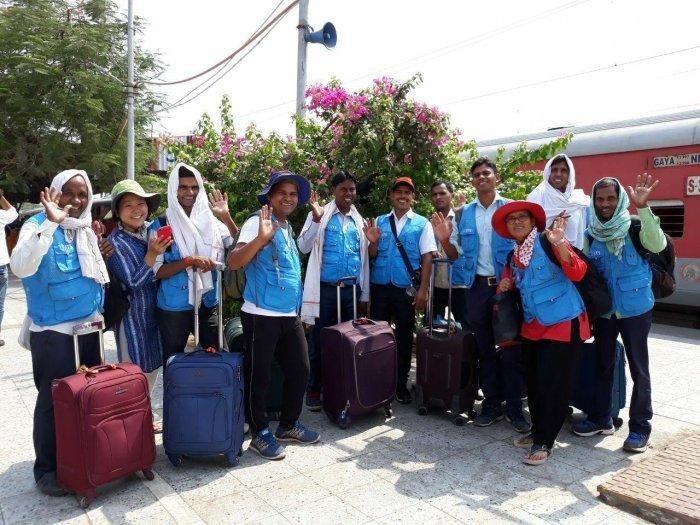 Twelve staff members from JTS India visited Korea for 9 days on May 28, 2018. They are from Dungeshwari and Sanka Cia in India. Some members have worked with JTS Chairman Ven. Pomnyun Sunim since 1991 when he went on a pilgrimage to India to tour the sacred Buddhist temples and sanctuaries. During the pilgrimage, Pomnyun Sunim vowed to help those in need in India, so in 1994, he built a school in Dungeshwari with the village people. Some of the visiting JTS India staff have been with Pomnyun Sunim for up to 25 years and are the greatest assets of JTS India. 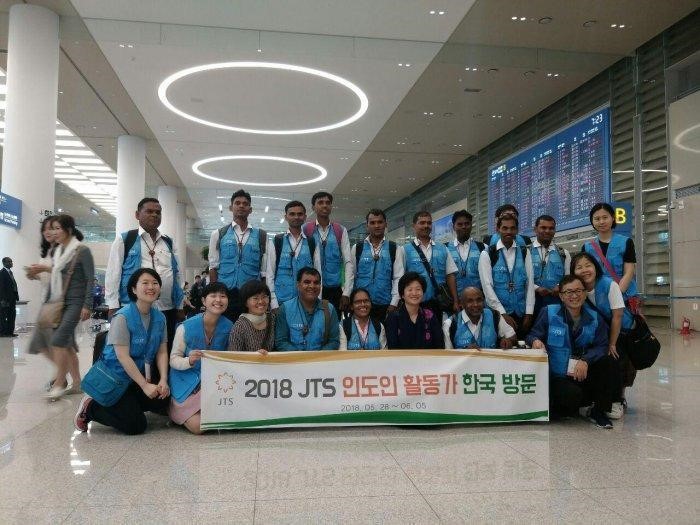 At the Incheon International Airport

JTS India staff, who were in South Korea for the first time, visited JTS headquarters and participated in a JTS street fundraising campaign. They also visited educational facilities, such as daycare centers and schools, and agricultural and livestock farms, which allowed them to broaden their views and understand Korea and JTS Korea.

On the evening of their arrival, JTS Korea prepared a welcoming reception for them. JTS President Gi-Jin Kim opened the reception with welcoming words and presented a flower to each staff member of JTS India. This follows the Indian tradition of greeting important guests by presenting them with flowers. Then, the JTS India staff members introduced themselves and explained their area of work and service. Some of them even introduced themselves in Korean. 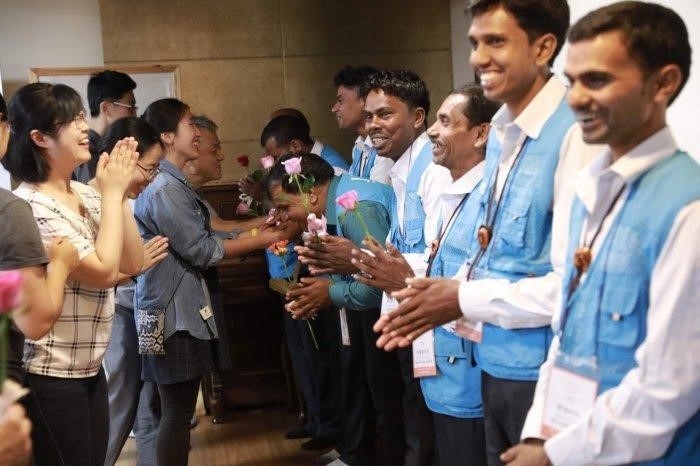 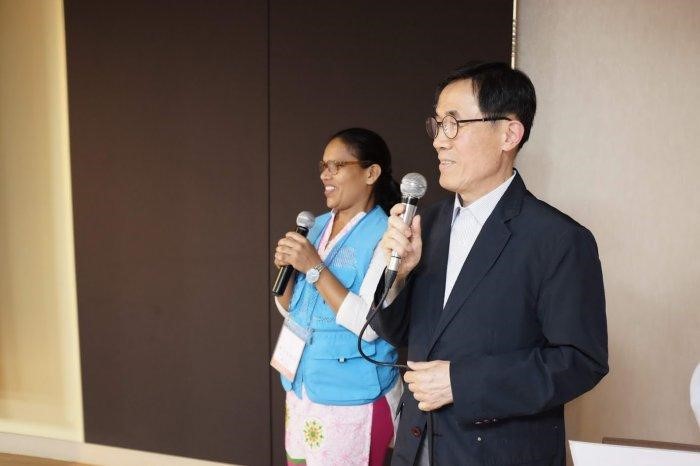 Banjay, a staff member of JTS India said, “I have heard before that South Korea is a very clean and developed country, but I was very surprised to see how well-run the transportation system actually is. At the airport I was overwhelmed by the warm welcome from so many of you. I don’t know if I deserve such a welcome, but I am very thankful.”

The following day, JTS staff members began their busy schedule. It was impressive to see how eager they were to learn as much as they could before returning back to India. 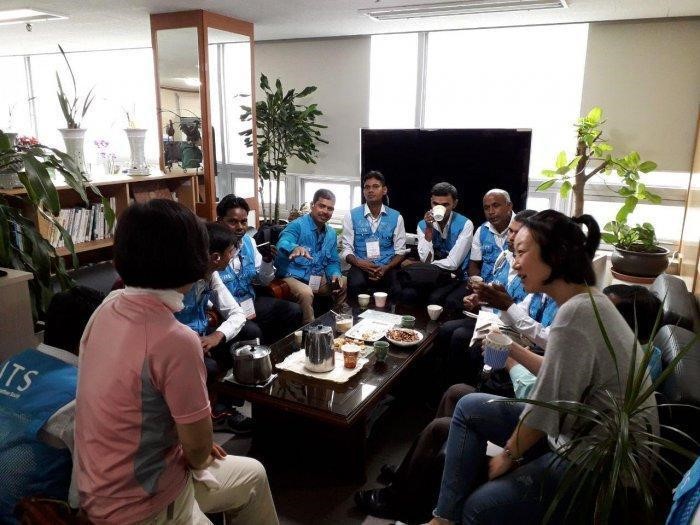 During the visit to JTS Korea office, Babral, one of the JTS India staff members expressed, “I was especially impressed to see how women in South Korae are actively involved in volunteer work despite being married and having children. In India, women usually stay home after they get married. I didn’t understand how women can volunteer for JTS when they have so many chores to do at home, so I wouldn’t have believed it if I had heard about this in India. Seeing you volunteering here because you really want to and hearing you explain about your work helps me believe it.

Following the JTS office visit, the JTS India members toured some educational facilities including a daycare center, an elementary school, and a college. JTS India members who worked as staff and teachers of Sujata Academy were inspired by the school facilities in Korea. They were especially amazed by the lively interaction between the teachers and students and by the use of diverse educational tools during class. 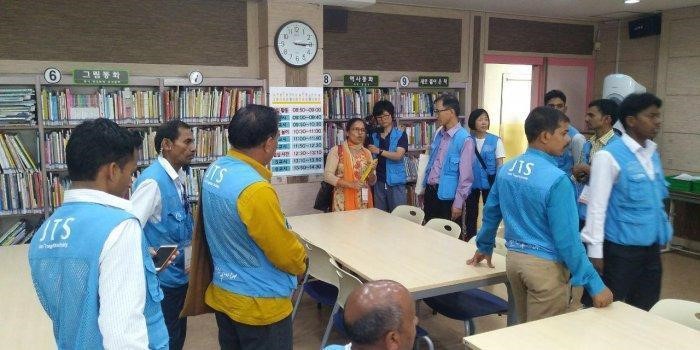 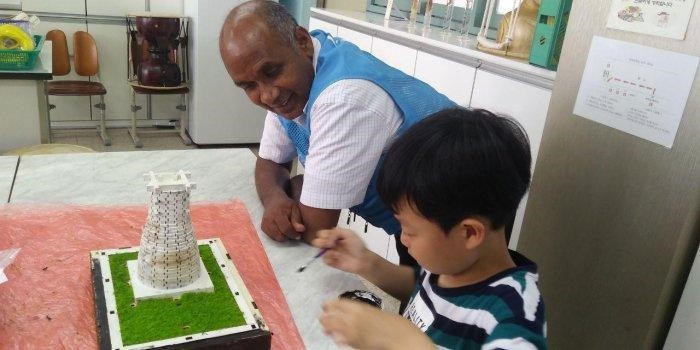 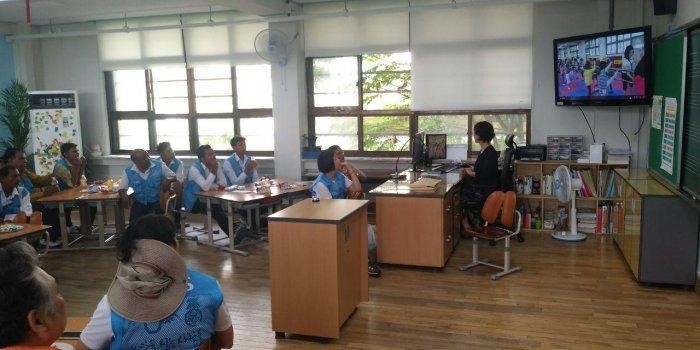 The staff members also visited some farms and orchards. After listening to a lecture about Korean organic farming methods, they visited a greenhouse for some hands-on experience. Then, they toured a mushroom farm, an apple orchard, a chicken farm, and a cattle farm. “The climate is very different in India compared to Korea, but it was interesting to visit organic farms and rice farms in Korea. We learned that snails are used for organic farming. There are a lot of snails in the fields back home in Dungeshwari, but we didn’t know why they were there, so I was happy to find out their purpose today,” said one of the JTS India staff. It was a good learning opportunity for them. 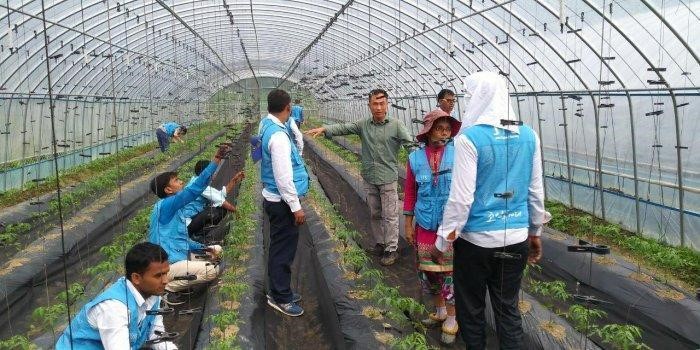 Hands-on experience of organic farming in a greenhouse 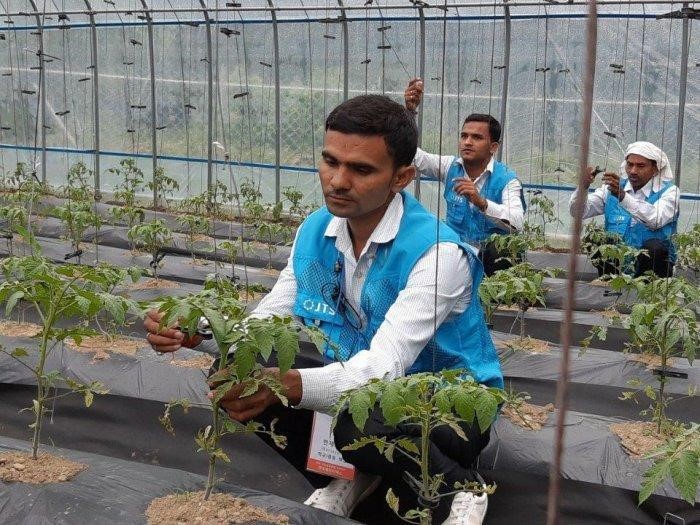 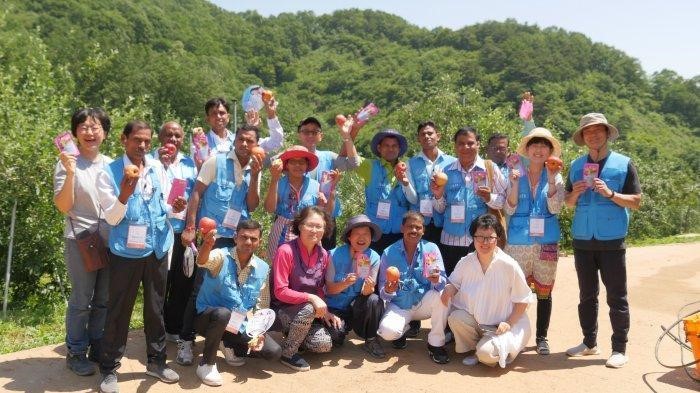 At an apple orchard

JTS India staff had a chance to participate in the street fundraising campaign. They were impressed to see the volunteers participating in the campaign held in Daegu with enthusiasm and bright smiles despite the hot weather. One JTS India staff said, “I learned today how hard the volunteers work to raise money to send to us, so I realized that we should spend the money wisely. Also, I experienced that street fundraising is hard because you have to talk constantly. It was moving to see the JTS Korea volunteers talking confidently and kindly to the people on the street when asking for donations.” 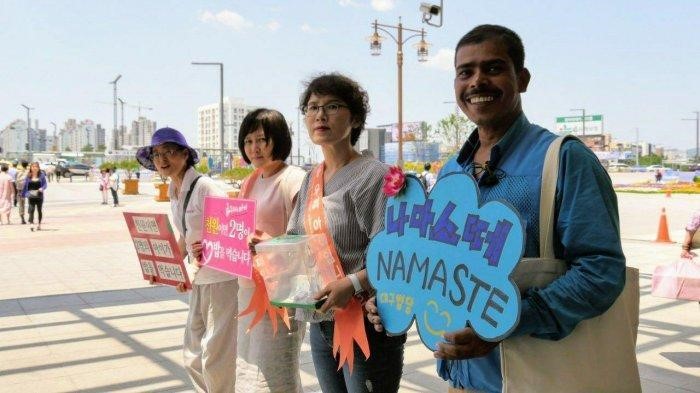 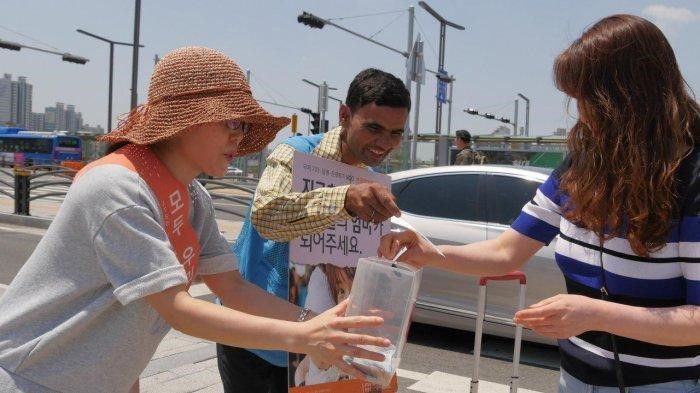 Actively participating in the street fundraising 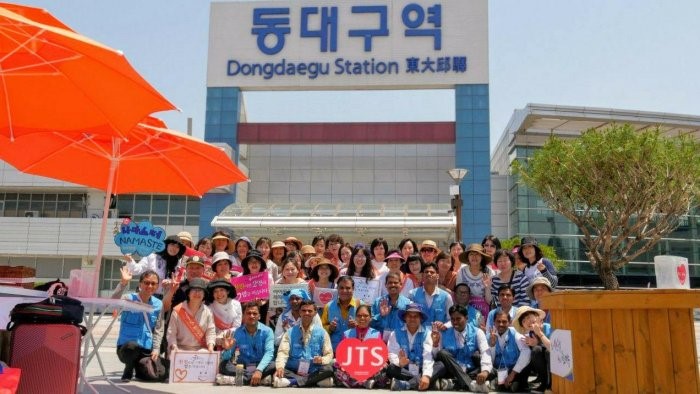 At Dongdaegu Station after the fundraising

Finally, there was a special meeting between the JTS India staff and some JTS Korea staff who did volunteer work in India a long time ago. These Korean staff members stayed in India from 6 months to almost 10 years, working at JTS India. They are the unsung heroes who worked hard to build JTS India. To celebrate this meeting, the JTS Korea staff created a photo gallery displaying the pictures of JTS Korea volunteers working in India. 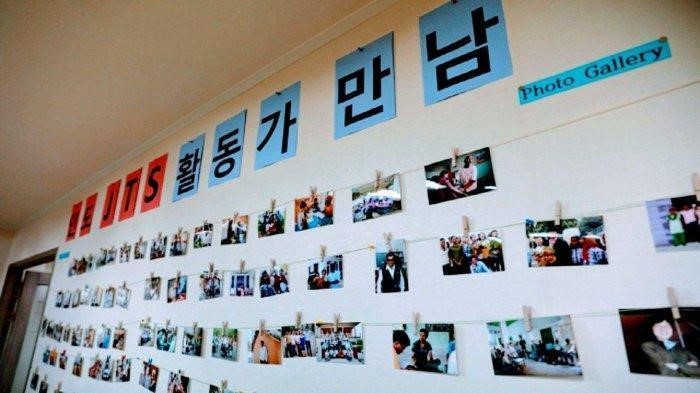 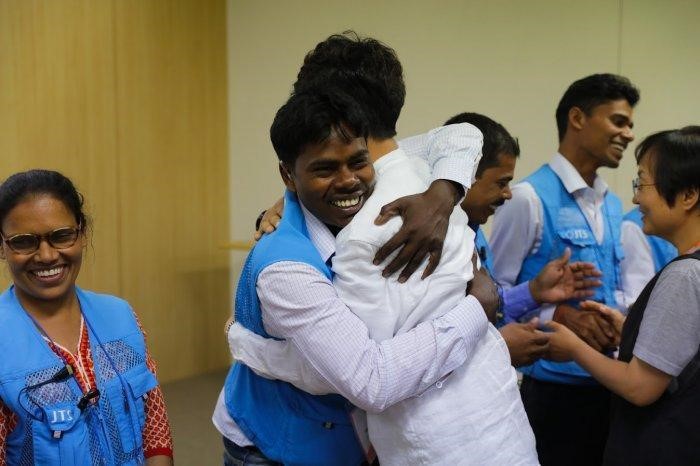 Greeting each other happily 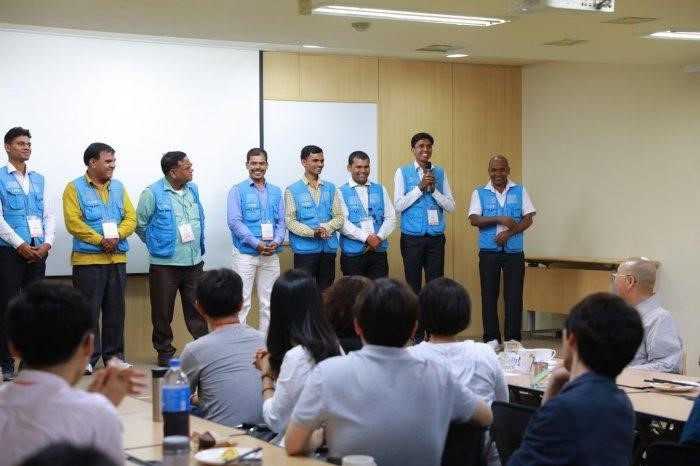 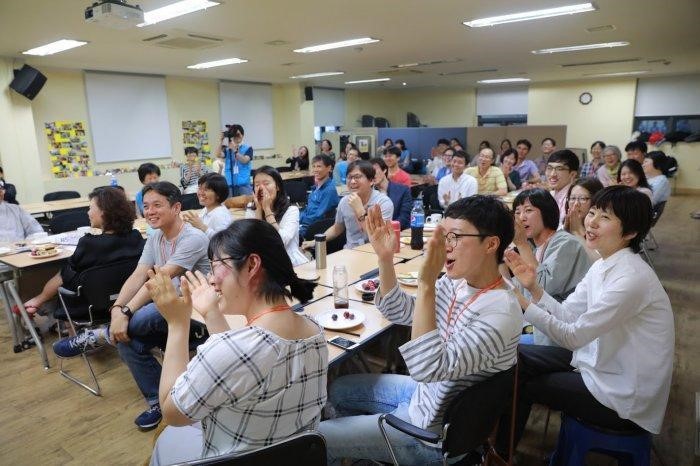 JTS Korea staff who had volunteered in India said emotionally, “We are very happy to be able to reminisce about the most meaningful time of our lives. The JTS India staff responded, “We don’t know how to repay you for all you have done.”  It was a happy and touching occasion for all of them.

Pomnyun Sunim explained the meaning of volunteering by stating, “From time to time, the volunteer work we do may seem insignificant, but working for one’s individual interest is not meaningful at all. Sleeping in a big house or a small house is actually no more than dreaming of sleeping in a big house or a small house. High social position or material wealth are also as meaningless as a dream. However, even though volunteer work may seem small and unnoticeable, with time, it yields big results and is very meaningful. As for the work we did together in India because one man couldn’t do it all, it has resulted in kids who used to be on the streets and needed help became these volunteers who give help to others. Don’t you think that they will at least become the seeds of change in their own village?” Pomnyun Sunim expressed his gratitude for all the volunteers who have planted the seed of change in India. 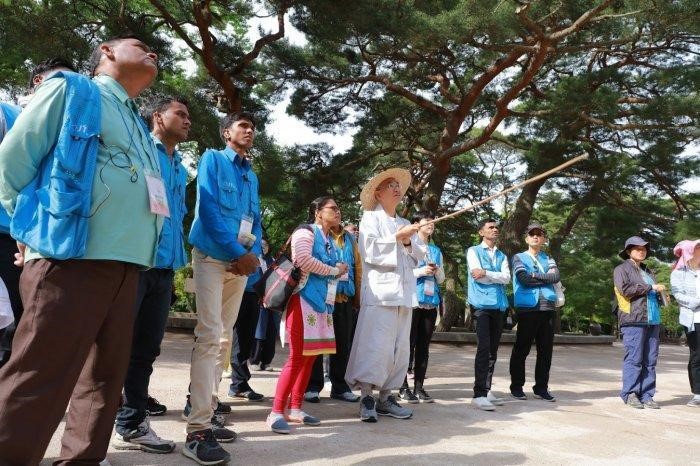 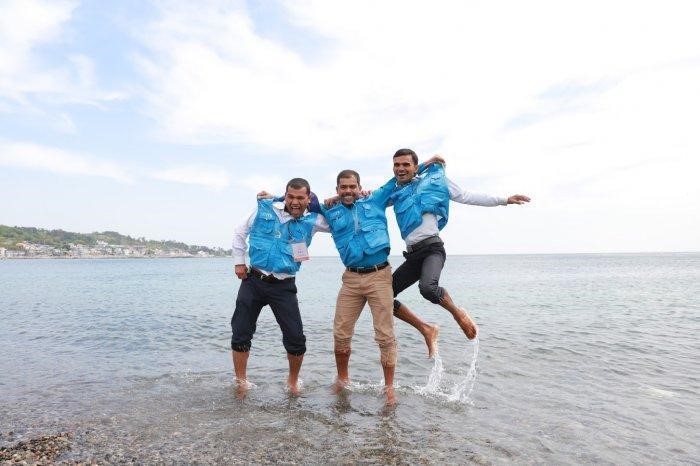 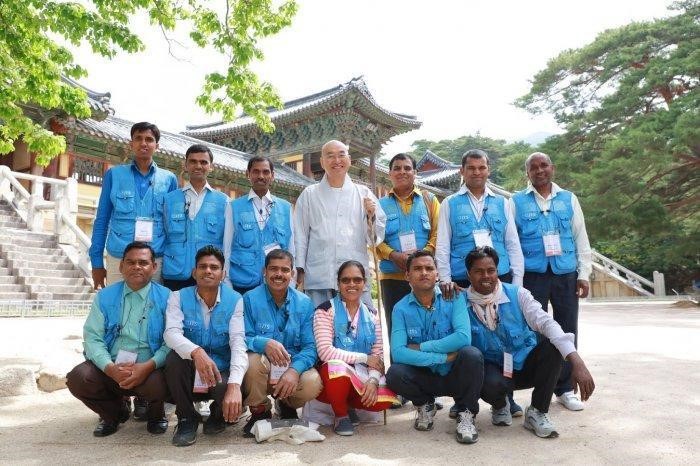 The nine-day visit to South Korea ended at the Bulguk Temple. The entire JTS India staff had come for the visit and they needed to go back to resume their work at the school and other JTS projects. They said “We couldn’t sleep before the trip due to excitement. We have seen and learned so much during our short trip thanks to the efforts of many people. Thank you.”  They gave their thanks to all those who made their trip possible. Also, they talked about a plan to establish a volunteer system that enables everyone – young, old, male, and female – to volunteer. Another plan they had was to do some farming based on what they learned. They all agreed that the most important thing is education, which enables us to foresee a bright future for JTS India.