On July 16 of 2018, Dr Jinsuk Kim arrived at the JTS Philippines Center ahead of his medical service team. After retiring from his medical practice in February of this year, he founded the “Jungto Medical Team” with other medical professionals in Jungto Society. The medical team chose Mindanao Island in the Philippines for its first small scale medical service trial.

The medical team that came to volunteer at the remote village of Mindanao Island consisted of three doctors with both Western and Eastern medicine backgrounds. Dr. Kim arrived before the other members and remained on the island as a medical staff until August 13th. We met Dr. Kim for an interview before he left for Korea. He talked in detail about his experience on Mindanao Island and plans for the future. 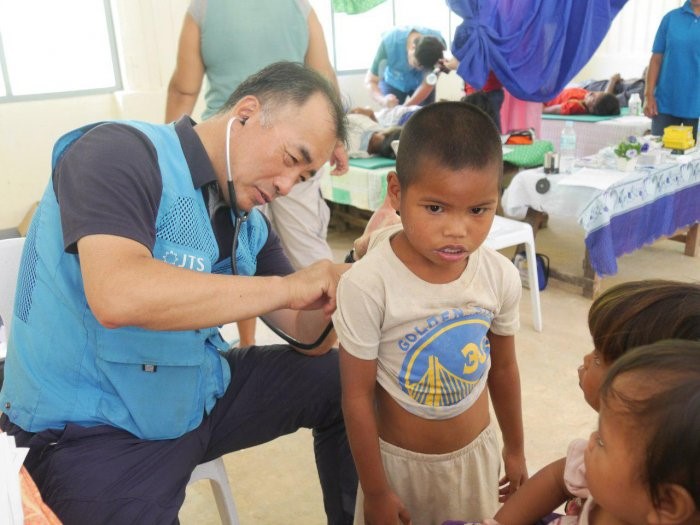 He said, “Unlike South Korea, which is experiencing one of the hottest summers in its history, the weather at JTS Philippines, which is situated 1,000 meters above sea level, feels like early fall. I need to wear a padded jacket in the mornings and evenings. Since I am surrounded by nature and clean air, I have been happy just being here. The blue skies and clouds over the hill are reminiscent of a scene from a Miyazaki Hayao animation movie. The cool weather, beautiful scenery, clear skies, and clean air made this place feel like paradise, but what made me happier were the JTS Philippines activists. As I observed them, I realized that we can achieve greatness if we let go of the notion of self and practice humility. I witnessed a single young activist persuade and negotiate with the local residents and government to build a school and carry out village development plans. I saw female activists in their twenties, wearing baggy pants, sporting short hairstyles, and riding on the back of a motorcycle to accomplish the tasks at hand. It was truly inspiring to see these young activists greeting the local residents, strangers to them, and approaching them with broad smiles. I was in awe realizing how the careful teachings of Chairman Pomnyun Sunim and JTS Philippines CEO Wonjoo Yi, coupled with the power of spiritual practice, enabled these young activists to achieve such greatness. 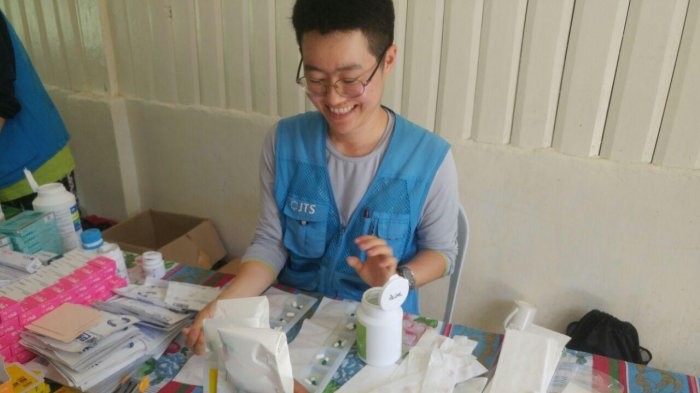 The medical service was a success. The first village we visited for medical service was Catablaran in Cabanglasan Province, a remote mountainous village that takes 1 hour by motorcycle. JTS Philippines is currently building a school there. A group of about 10 motorcycles speeding through the narrow mountainous road was quite a sight. Upon arrival, we found nothing but houses and corn fields in the cozy village. It was difficult to imagine what life would be like living there. The first patient came in with a large open wound to the leg, which he occurred while operating farming equipment in the corn fields. 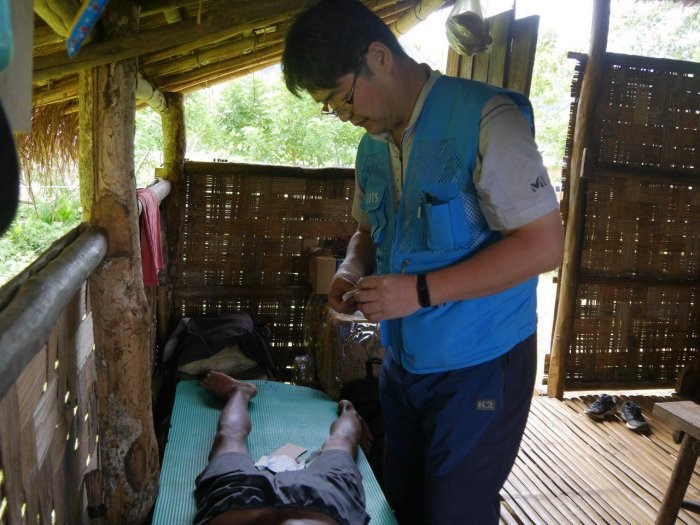 I was shocked when I saw my first patient. His wound was not sterilized, and he had not taken any antibiotics. Since the wound had not been treated in any way, the entire leg had swollen up badly and turned dark in color. I was concerned that the patient might soon develop blood poisoning. I tried to stitch up the wound, but it was hard to do it properly due to the severe leg edema. I stitched it up as best as I could and dressed up the leg. Other patients mostly came in with colds, musculoskeletal ailments, and digestive issues. They came in family units of 5-6 people consisting of children and the mother. It was amazing that a household has an average of 8 children.”

Among the patients were some who needed critical care including a patient with high fever suspected of a food poisoning and an elderly woman who had fainted from exhaustion after vomiting. The children with a cold had ear discharges. When I examined their ears with an otoscope, I found severe inflammation that caused the eardrum to perforate. It was mind boggling to see that half of the children coming in with colds had abnormal eardrums caused by ear infection.

On the surface, the village in the mountain seemed peaceful and was filled with children’s laughter. However, poverty was deeply rooted there, and it made us sad and uncomfortable. The carefree children and the pristine nature seemed so incongruous with poverty and alienation from modern civilization. 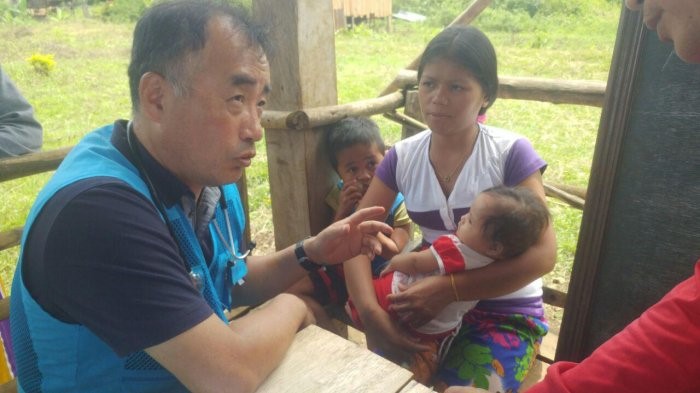 “Seeing the patients leaving with a smile, we left the village thinking that we were very fortunate to have had the opportunity to help them even a little.”

The next day, we went to the village of Simsimon in Fernando Province for medical service. The county office recommended the village to us as it had suffered a severe typhoon damage in 2017. There, we worked together with the local medical professionals. 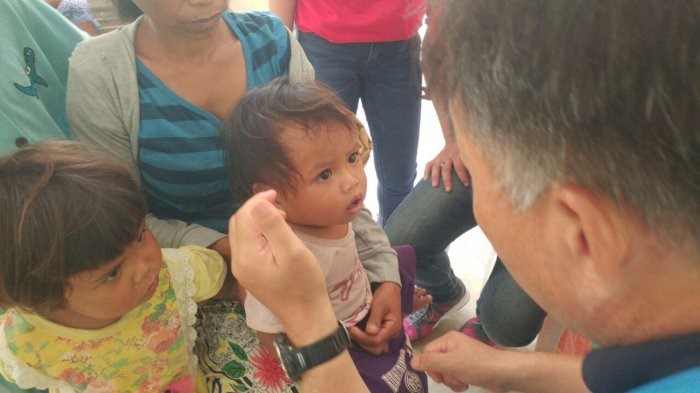 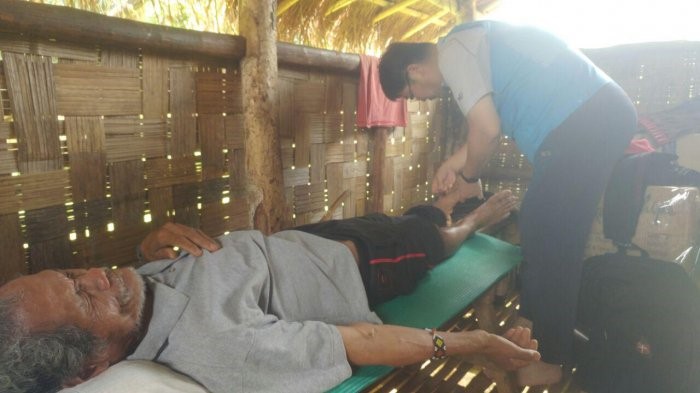 We treated the patients alongside Dr. Edma, the only medical doctor in Fernando Province, and 20 medical support personnel of the municipal health center. Despite the poor medical infrastructure, the local medical staff were passionate about ensuring the health of the residents. At the village, there were many patients with external injuries. There was a child with a 5cm-long laceration, which would have been easily treated with stitches, but regrettably, I had used the last kit the day before. Quite a few came in with burn injuries from a motorcycle muffler, and many had small external injuries to the lower body, which had been left untreated. They had never sterilized their injuries or taken any medication for them. A child who looked to be about 10 years old came in crying from pain, unable to move his shoulder after falling off a motorcycle the day before. He appeared to have a joint dislocation or fracture, but since it was an injury that couldn’t be treated at the village, we recommended that he be taken to a hospital for X-rays. As the municipal health center an hour away isn’t equipped with an x-ray machine, he had go to the nearest hospital, which takes 2-3 hours by car. 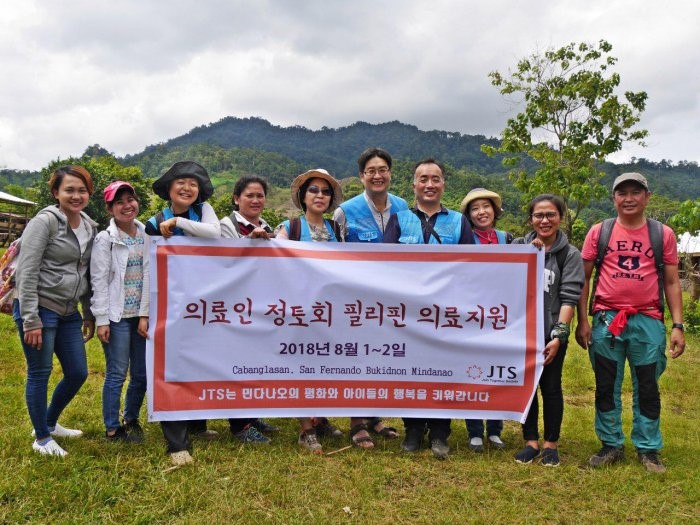 Doctors of the Jungto Medical Team agreed that there are many people around the world who need medical care but are not able to receive adequate treatment. They agreed that the medical service on Mindanao Island was meaningful, so they decided to continue providing medical service to the residents of the island for a minimum of 3 years. By providing medical service, it will be possible to understand better the medical situation of Mindanao Island. Also, by cooperating with the local medical professionals we will be able to find out the best method to meet the healthcare needs of Mindanao residents. Based on our experience this year, we will be able to prepare better for next year’s medical service trip, so that we can provide treatment to more residents of Mindanao. We are already looking forward to our next summer in Mindanao.”